Benefits at a glance:

The LinearChain push/pull actuator is able to move large loads horizontally and vertically with high positioning accuracy. The LinearChain series consists of specially designed links, whose geometry prevents them from being kinked under pressure loads. As a result, the LinearChain can be used as a conventional linear drive.

The chain is driven using a special housing with integrated chain sprocket to which a drive motor, such as a shaft-mounted Compacta drive motor, can be flange-mounted.

Besides the standard LinearChain range that is sold since 2014 by the Company Grob GmbH Antriebstechnik, Framo Morat has developed in the past years many projects based on special LinearChain designs. Customer-specific variants of LinearChain are for example used in drives for dental or medical technology.

Its many years of experience in the drive technology field make Framo Morat your reliable development partner with system competence who will offer you a technically and economically mature solution.

General information about the LinearChain

In the industry, the market offers to the user several usual systems to create linear motion.
Generally, these systems include hydraulic or pneumatic cylinders, or electro-mechanical spindle drives. Also cam, disk or redirection systems are often used.
The thrust chain is a novelty among these systems. A special chain that, unlike the known traction chain, becomes rigid in the thrust direction. It nevertheless can be redirected with sprockets.

The classical power transmission element, the endless chain with at least two sprocket wheels (drive and return) and a tensioning element becomes a “finished” chain with two free ends. The drive can be positioned at any point.
The thrust ability is ensured by specially formed chain links that interlock and support each other with minimum play. The load is attached to one end of the chain, e.g. by means of a latch or of a hook. To that purpose, the chain ends are provided with transversal holes for screws or bolts.
During the move, this latch / hook interlocks with the pushed load or its support.

The other free chain end can be guided according to the needs. To save space, it is rolled in a magazine. This space-saving design is one of the main advantages of the system.

LinearChain’s main task is to move average and large loads in any direction (also vertically).
A sprocket wheel integrated in a drive housing actuates the chain.

According to the thrust power, the stroke length and the speed (all individually definable), LinearChain can perform its task running on a sliding surface or in a guide rail. 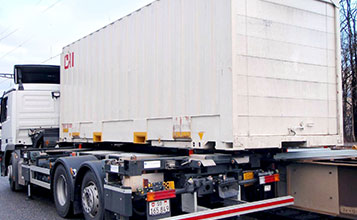 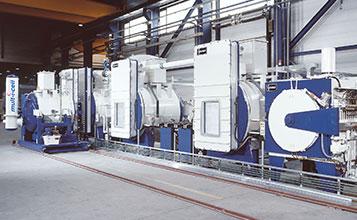 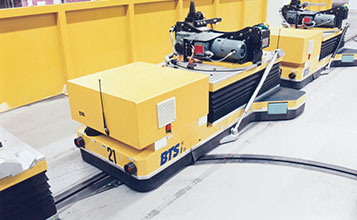