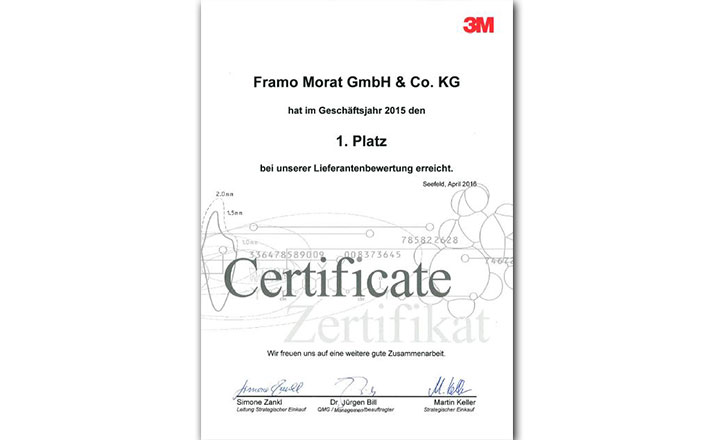 We are proud to accept the first place award for the third time from 3M Deutschland GmbH’s renowned annual supplier rating. The rating of approximately 1,500 suppliers was based on quality, delivery reliability and innovation. Framo Morat has highlighted its high standards for product quality, delivery performance, on-time delivery and the focus on the satisfaction of its customers with six placements in the top 3 within the past seven fiscal years.

3M Deutschland GmbH in Seefeld is a leading company in dental technology. Framo Morat supplies 3M with two variants of component mixing devices that meter and mix two viscous, paste-like substances in the correct ratio and in the desired amount automatically at the push of a button. The challenge during the collaborative development of the Pentamix was designing a drive that was quieter and smaller while being twice as powerful as the predecessor model at the same time. Here, Framo Morat was able to use the development expertise it collected over the course of numerous drive projects.

A total of 132 different individual parts make up the drive. In addition to manufacturing individual components made of metal as well as plastic at sister company, F. Morat, Framo Morat is also responsible for the complete assembly at the headquarters in Eisenbach, Germany. Since 2015, drives have been assembled and packaged in a ready-to-ship state in the new assembly plant in Nowa Ruda, Poland, including partially automated end-of-line testing and data archiving.